St. Andrew’s Church is a spectacularly beautiful Roman Catholic church built in the gothic Cruciform (the shape of the cross). Due to its Cruciform construction, this church was named the Holy Cross Church.

This church is said to have existed well before the 17th century. The year of establishment of this church was 1761 according to official records of the Mangalore Diocese. Jain kings reigned over Hospet for many centuries and Jain literature has evidence of this church's existence even before 1648. During the time of the destruction of churches by Tippu Sultan, this was the only church that escaped demolition due to the friendly offices of the Chauta Raja of Moodbidri.

The Church of the Holy Cross was formerly known as Bidrem Church and the name Hospet was added after the death of Tippu Sultan in 1799. It was Father Jerome Paul Carvalho who repaired the old church in 1865. Under the Goa jurisdiction, 11 vicars had served this church. The foundation stone for the church at present was designed by Father A. Diamanti SJ and V. Rev. Frachetti SJ, the Vicar General laid the foundation stone on October 1, 1905. This church is among the first in the diocese to be built in Cruciform and gothic style.

This church is located at a distance of 41km to the north-east of the city of Mangalore and is only 46km away from the Mangalore International Airport. This church is also in close proximity to Moodbidri Town (only 6km). The parishes of Moodbidri, Kuppepadav and Tacode surround this church. The exact beginning of the Parish is not known but it is known for sure that the Parish has a Portuguese origin.

The Holy Cross Church Parish has seen many modifications since 1798 . There have been modifications in the physical as well as the political areas of the Church. Many Priests have come to the church and rendered their faithful service and now, many Daughter Churches have been born out of this huge Parish. Therefore, currently, the Parish accommodates 294 families in 9 Wards. From a long period, this Church has produced many Nuns, Priests, Godly and Religious families. 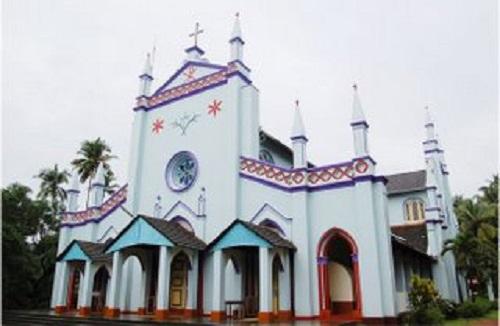 History of the Holy Cross Church

Jain kings ruled Hospet for many centuries. According to history, the original name of the Holy Cross Church was 'Bidrem Church'. This is because 'Bidrem' or 'Moodbidri' was famous even in ancient days due to the reign of Chouta Raja as well as the many Bhasatis which are religious institutions of Jains. This was the only Catholic institution near and around Bidrem, and hence it was called as the 'Bidrem Church'. However, many people also called it as The Hospet Church.

History records the raids and devastation of the Catholic institutions by Hyder Ali and Tippu Sultan. Immediately after the Treaty of Mangalore was signed in the year 1784, Tippu Sultan gained rule over Canara and commanded all the Christians in Canara to be captured. He also brutally ordered the demolition of 27 Catholic churches, all with amazing carvings of statues of different saints. But, history records that The Church of Hosabettu was not demolished by Tippu Sultan. The reason is that the Catholics of the area used to cultivate betel leaves and were the major providers of the same to the Bidrem Chouta Raja and his officers. Therefore, these people in return protected and saved the Church and the Catholics from the ravaging act of Tippu Sultan by not disclosing the Church's existence. Hence, this was the only church that escaped the demolition of churches by Tippu Sultan between 1784 to 1799.

According to the records of the Church, Rev. Father Benedict Reis De Trividad was the first Parish priest in the year 1798. At that time, there were hardly a few Churches in South Canara. Hence, for a long time, the jurisdiction of the Parish extended over a large area in South Canara. The Gurpur River was the southern boundary, the Western Ghats were the eastern boundary and Chilmby was the dividing line between Karkal Attur Parish and Hosabettu. Pezar, Kirem and Agrar were the other neighbors of the Parish. The other Parishes of the neighborhood are of recent origin.

Although the arrival of Rev. Fr. Benedict Reis De Trividad in 1798 marks the beginning of the Parish, the church's existence has been proved to be even before 1798. The reason is that, recent enquiries with the ‘Bidrem Jain Bhasati' authorities have brought to light the the Church's existence prior to 1648. Also, there is evidence in ancient Jain literature in Moodbidri for The Church of Hosabettu to have been well established before the year 1648. Moreover, St. Thomas, the Apostle of India kindled the light of the gospel of Christ during the first century A.D. in the South India. After him, the early Franciscan Missionaries continued preaching the gospel in Canara in 1510. So, we can assume that the Church might have been started soon after the year 1510 or even before that. Due to lack of maintenance of ancient sources and records, it is very difficult to find out the exact Alfa or the Genesis of The Church which remains mysterious and untraceable. 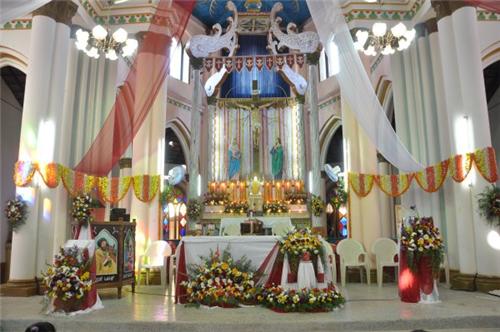 The first Bidrem Church building was located on S.N. 75 about 300 yards from the present Church building, to the south. The plot on which it was built is presently called ‘Bhat' and there might have been any other site originally for the Church. The beautiful Church building with an artistic gold gilt Alter was erected on S.N. 74-3A. The Sanctuary of this Church was used as a sacristy till the year 1932. The Parochial house was built in the same year that the Old Church was built, but the year and the people who built them are unknown.

By the year 1904, the Church building became rickety and needed compulsory restoration. With the cash savings of Rs. 40,000, the two confraternities of the Parish called 'Church Confraternity' and 'Fabrica', Rev. Father Cajitan M. Pereira decided to build a new Church. Rev. Father Diamanthy S.J. made the master plan of constructing a grand Gothic style Church with a Cupola in the middle.

Rev. Father. Cajitan M. Pereira was worried due to health issues and was not able to carry on the work any more. Msgr. M.P. Colaco took him stay with him at Cordell Church for a period of 3 months. His health did not seem to improve and so they took him to Father Muller's Hospital Kankanadi, Mangalore, where he died a broken man. His tomb rests at the Leper's Chapel in Kankanady. At this time, Father. Cortie S.J. was assisting with the Parish work.

Rev. Father. Rosario P.B. Lewis who succeeded him as the Parish Priest was under obligation to complete the work. With the aim of reducing the expenditure, he made some alterations to the plan. The Cupola was removed from the plan and the style of the windows was converted into half Roman. His goal was to somehow complete the Church building plan instead of focussing on a particular style and getting into unnecessary debt. In spite of his clever plan, he had to borrow Rs. 8000 from Mr. S. L. Mathias of Karkalla and also raise a loan.

Unique Facts About the Church

When looking at the aerial view of The Church from the sky, it is the actual sign of The Cross. This is because The Church is built in that style, the Cruciform style which is the shape of the cross. The Holy Cross Church, Hosabettu contains the souvenir of The Original Cross of Christ.